Apologies for taking some time to write on my first day, but I must say, it was VERY fascinating. I had arrived about 10 minutes early and sat in the corner. 7AM came and went, and I was starting to wonder if there was something wrong. Wrong place? Time? Cue the internal screaming. Then a resident comes in, looks past me and sits down with this glazed look on his face. I was about to ask him if he was feeling okay but more residents sat down and had the same look while they checked their phones. Dr. Harken was late as well, as he just started talking immediately and kept watching the clock. I realized that it was a Monday. Nobody likes Monday.

Dr. Harken gave the students a case study from another hospital. Patient is a 50 yrs old  female who comes in with 50% TSA (total surface area) burns. It’s mostly on her trunk. Her blood pressure (BP) is 100/70. Heart rate is 140. Respiration rate is 28, and her temperature is 38.5. The question posed was, how do you replace her fluids if so much of her body is burned? Everyone was so quiet, I could hear the heater turning on. Apparently the accepted answer is that the IV can still be placed despite the burn. The increased breathing and heart rates are due to the patient becoming hypermetabolic and the immediate concerns are the ABCs (airway, breathing, circulation).

Another study the group seemed to be interested in was a study done on several young men. After being exposed to carbon monoxide, the young men were found to recover more quickly after oxygenation and mild exercise. Dr. Harken then explained the importance of adequate and effective oxygenation for all patients, not just burn victims.

Everyone seemed to have the Monday blues because no one wanted to talk and everyone shuffled away after. I made it up to the 5th floor myself and went to the nursing station to ask for the vendor card. The nurse kindly nurse told me that someone else had it. Upon feeling very lost and walking into the women’s locker room, no one was there. I kept chanting, “Be invisible” to myself, so I was loathe to return to the nursing station. What if nurse Julia was there and she was scary? I braced myself and went back. The kindly nurse smiled at me and gave me her card to get scrubs. I rushed back into the locker room, elated, and then took a look at the name card. Nurse Julia Wang. I almost dropped the card. A resident on the way out shot me a strange look when I let out a “Meep.”

Looking at the board, I watched, somewhat horrified as Nurse Julia crossed out all the surgeries on the board. Not sure if that meant canceled or already happening. I thought she was updating the board until she turned around and directed me to OR 1. I was really thankful and scurried over there after thanking her a bunch. At that point it was 7:54 and everything was still being set up. I talked to the residents and got some names. Dr. Jerry Merriman was very kind in answering any questions and telling me about what was going to happen. Dr. Mike Krosin then walked in with a red lead apron on. It felt like I was in the presence of a celebrity! He told me that I would get to see a lot today and I would need a lead apron for this surgery.

This surgery would take over 7 hours. The patient was a 36 year old female from LA. She was working construction and got her foot stuck in the mud. When trying to get out, she fractured her right tibia. Due to her weight and the accident, the fracture was quite large. This surgery would be a right tibia plateau ORIF (open reduction internal fixation). An ORIF is a surgical procedure to fix a severe bone fracture, or break.

The surgery took a while to start because they had taken a pregnancy test and found out she was pregnant despite the patient not knowing she was. The RN, Benny, let the patient know about the possible risks. She signed a form and told Dr. Krosin about how she didn’t know and she didn’t have a primary care doctor. Overhearing the hushed conversation, I heard that a social worker would be called and that the doctors were concerned that the patient would not follow up with her care once she went back to LA. I am glad there are doctors that consider these types of obstacles to getting care and pick up on the nuances of what is left unspoken.

I felt well-equipped with a lead apron on. The surgery involved making large 3-4 inch cuts on both sides of the right leg, a little above and below the knee. The tissue was slowly cut until Dr. Krosin reached the bone. He scraped off as much tissue as he could from the bone. There were power tools and drills and screws being fit in. The plan was to place two plates to buttress the bone. I would like to describe it more, but here is a poorly drawn picture instead. 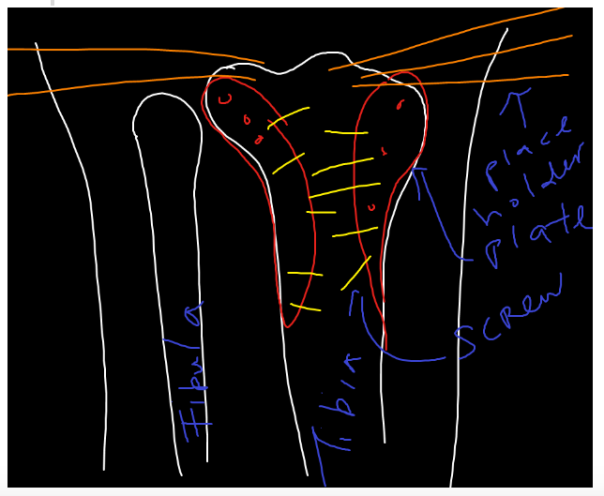 I have never thought of surgeries as carpentry, but in this case, the surgical techs told me all the same tools were used, just with different names. I ended my day at 3PM because my back was killing me from standing in the one spot watching this surgery. There were many moments where I thought, “This can’t be real.” I realized how difficult it was to get the screws in, how slippery the blood was after a screw was dropped, how hard it is to see where a screw went in unless there was an x-ray.

I don’t regret staying in this single surgery, because while it was lengthy, I saw how teamwork and conversation occurred in the OR. The importance of voicing out concerns and observations is important in producing good outcomes. Dr. Merriman caught that the patient didn’t have a lead apron. Dr. Jackie caught that one of the screws were not the correct length. This was an amazing learning experience.

Dr. Mike Krosin has a tendency to randomly sing a line of lyrics from the DIY speaker (a cellphone inside a cylindrical container).

When the patient is strapped in, the doctors will say “Airplane left” or “Airplane right” to have the tech turn the patient toward them. I didn’t understand until I say how they strapped in the patient’s arm and she really did look like an airplane.