I was late to the morning teaching; arrived around 8A.M to Highland and went directly to the OR. I saw Dr. Harken talking to Dr. Lim second year general surgery resident; so I joined the team for the rest of the day.

First patient was in her sixties complaining of chest pain. The patient had a Pacemaker 10 years ago because of third degree heart block and was stable until lately where the battery of the machine is no longer working which needed to be changed soon as possible. Let’s talk a bit about what is heart block? As the name says “Block” it means that the electrical drive pathway of the heart from Atriums to Ventricles is blocked somewhere (see picture 1). Usually the cause of this block is a fibrotic tissue came from either aging, side effects of medications, or diseases. We classify the block on three degrees. First degree there is slow electric conduction from atriums to ventricles, in the second degree there is an asynchronous between the atriums and the ventricles  sometimes ventricles contract after atriums sometimes not, and the third degree is when the ventricles contract independently from atriums. To regain the heart beat synchronization, we need to coordinate between atriums and ventricles by a Pace Maker (means it will speed the electric activity from atriums to ventricles). It has two wires one connected to the inside of ventricle and the second to the inside of atrium, from that the machine will know instantly when the heart is contracting and which cavity is delaying (see picture 2). The surgery was easy and fast, after injecting of anesthetic drugs Dr. Lim made an incision on the old surgical scare and took out the old pace maker after disconnecting it from the wires that had been introduced to the right heart cavities and fixed a new machine in the same place.

The second patient was 62-years-old, with a history of Coronary Artery Diseases -had three stents on 2010-  complaining of chronic and intermittent chest pain. A second degree heart block was diagnosed with a severe bradycardia 35 beats/min (it was a second degree type 2 or Mobitz II block). I talked to the patient in pre-op for awhile with her niece, a bit stressed but she was smiling at the end when the circulator came. After skin sterilization of the chest and neck, Dr. Lim made a small incision below the left clavicle guided by Dr. Harken. She stuck the left axillary vein and introduced a wire toward the right ventricle. X-ray with scope was used to make sure that we are in the vein toward the right heart not in the artery toward the left heart. First, Dr. Lim pushed a ventricular pace maker lead guided by the wire and the X-ray toward the right ventricle. A very funny technique; first we need  to push the lead -we saw in the screen that the lead was driven by the blood flow to the pulmonary artery- from that we need the retrain the lead few cm until it became straight (not curved) then push it again “but fast this time” in the way that it will be driven by the blood flow from the atrium to the bottom of the ventricle; the lead has a hook like shape which can stick easily into the trabiculated (not smooth) ventricle wall. Second, is the atrium lead guided by the atrium wire and the X-ray, this lead should be fixed perpendicular to the ventricle lead. Dr. Harken explained for as with looking to the scope screen how the two leads move with the heart beat, first the atrium lead then the ventricle lead, if one of them move abnormally or lately; a signal will be transmitted to the Pacemaker which can synchronize it. After making sure that all leads were placed and fixed in the correct place, Dr. Lim connected the leads to the Pacemaker and fixed it in subcutaneous bellow the left clavicle. A technician from the Pacemaker’s company was there with a special machine to program the Pacemaker in the safe way for the case (depending on the heart rate and the energy consumed by the heart in each beat).

Third patient was a 64-year-old diagnosed recently with Tonsillar cancer, in the need of chemotherapy. A port-vein catheter is necessary to deliver medicine safely. I also talked to him in the pre-op station. He was not stressed but he was a bit upset about the anesthesiologist who didn’t find a good vein for IV. The patient’s mother and sister were there, we laugh a lot when I asked the sister is the patient related to you? She said yes “I am his brother” and then the mother said so “I am the Daddy.”  After skin sterilization of neck and chest, Dr. Lim put a central line from the right jugular vein guided by ultrasounds and introduced a catheter through toward the right atrium, ideally into the superior vena-cava. She made an incision 2cm below the right clavicle where she fixed the chemo-chamber reservoir beneath the skin. It has a silicon septum where the nurse can stick needles easily and inject the chemo-drugs. To connect this chamber to the jugular vein catheter, the resident made a subcutaneous way, then passed and connected the catheter into it.

Fourth patient was a 70-years-old with End Stage Kidneys Failure who is in dialysis almost a year. He is a Mexican man, moved seven months ago to the USA to live with his son. I talked to him, he doesn’t speak English but the patient’s neighbor was translating to me and to the staff. He likes the US and he wants to stay here to the end of his life. He receives dialysis three times a week through a central line in the right subclavicular vein, which is at high risk of infection and sepsis. The surgery today is the arterio-venous fistula, where Dr. Lim and Dr. Harken made a fistula (a communication) between the Ulnar artery and the Ulnar superficial vein using surgical magnifying glasses. The Principal of the technique is that arteries are small, strong vessels with high resistance, and thick walls (for that we feel the pulses) but veins are large, weak vessels with thin and muscle-less wall (low resistance no pulse, for that veins can dilate easily and widely without rupture). So because arteries are  strong vessels, when we communicate an artery with a vein; the high artery pressure will be transferred to the vein, but because the vein is low resistant, the wall will dilate –after surgery it becomes bigger and easier to stick a needle in to- Try to palpate a vascular fistula when you have a chance (like in the ED, usually patient is in room 12) you will feel a thrill indicating a high blood flow transferring.  After making an incision in the lateral 1/3 lower left forearm, a superficial vein was readily under the skin but the Ulnar artery took some time to find, guided by its pulsation. Because of the patient’s age, Dr. Harken had pointed out for us a fibrotic tissue surrounding the patient’s blood vessels; we need to make sure that when we suture these vessels to keep the fibrotic tissue outside the lumen of the fistula (otherwise it can be a risk of fistula thrombosis).

The last patient was a 54-year-old patient hospitalized in the ICU; she had a third degree heart block in need of a pacemaker. The ICU staff brought the patient to the OR. The surgery had been in quick and safe conditions. Here the end of the Full day iVascular Surgery. 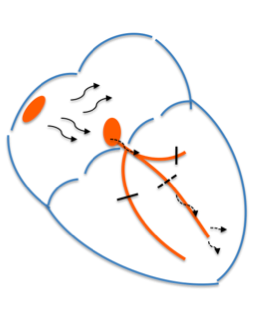