My First OREX experience was definately one to be remembered! Even though I was not feeling hungry due to nerves, I forced myself to eat breakfast. This ended up being a very good idea as both of the surgeries I watched were quite long. I arrived at the conference room around 6:50am, and mustered some bravery to sit at the table. The medical students/residents were very friendly as they trickled in, but I could tell they were a little curious who I was.

Dr. Harkin’s lecture discussed different case studies on statins, a class of drugs prescribed to help lower blood pressure. All of the studies found that statins were beneficial for those who took them, even people considered healthy. It is believed that statins work by blocking the liver enzyme essential for the creation of cholesterol; however, Dr. Harkin pointed out that there isn’t a lot of research verifying this mechanism. The question that he kept asking throughout the lecture was “if we do not understand why something works, is it ok to prescribe/use it on our patients?” My gut reaction to this question was initially “no,” but on further consideration, I’m not sure if there is a correct answer. It is the goal of practitioners to improve their patient’s health. If a drug is effective, then there is a potential that you are not serving the patient by withholding it even if its mechanism is not fully understood.

There were a lot of layers to this lecture, many of which I didn’t understand and it seemed like this was a topic they had been discussing for a while. In the end, Dr. Harkin asked if anyone would be willing to take statins themselves, to which the the room’s unanimous response was no. He wondered aloud: “If we are not willing to take statins ourselves, is it fair to expect our patients to?”

After the lecture, I quickly introduced myself to Dr. Harkin and he paired me up with Dr. Mihir who took me to the OR and helped me get my scrubs. The first surgery I watched was a modified radical mastectomy of the right breast performed by Dr. Godfrey and Dr. Fer. Dr. Godfrey asked if I wanted to scrub in and I jumped at the opportunity. Dr. Fer taught me how to do it properly, and the surgical tech Ana Maria taught me how to put on the gloves and gown. I was invited to stand directly next to the patient on a stool, the circulator Ramnik put some glasses on my face, and the procedure began. This was an amazing team of people to have my first OREX experience with. They were all very welcoming and very good teachers. If you can watch one of Dr. Godfrey’s surgeries do it! It’s obvious he loves teaching, and he got me involved at every opportunity. Throughout the surgery Ana Maria taught me names of different tools. Off the top of my head here are a few I remember:

The Bovie, which both cuts and cauterizes tissue. 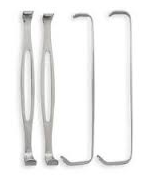 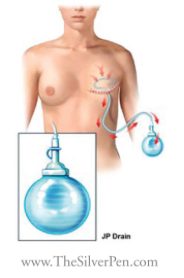 The surgery took about 2.5 hours, most of which was spent cutting the tissue down to the muscle using the bovie. I learned that because this patient had relatively large breasts the surgery would take a little more time and would be a bit more difficult than if she were smaller chested. Dr. Godfrey expressed the importance of using the bovi in a “long sweeping clock motion” which I understood to be much easier said than done as Dr. Fer needed a lot of reminding. They were careful not to cut too close to the skin, and to go around the port previously placed for radiation. Dr. Godfrey explained it is important to cut out the tissue 2 cm from the edge of mass because cancer cells like to “spread out”. It was decided not to spare the nipple because the patient was in her 70’s and suffered from dementia. After all the tissue and “bad” lymph nodes were removed, Dr. Fer placed two JP drains before closing the patient up.

Something interesting Dr. Fer told me is that historically 95% of the surgical cases at Highland come in through the ED. This is because many people are uninsured and use the ED for their primary care needs. Just recently, there has been a decrease in this number, and it is believed to be a result of increased insurance rates due to the affordable care act. He expressed concern that this trend would soon be ending as Trump has promised to repeal the affordable care act.

After a quick snack, I ran into Dr. Mihir who offered to take me into a laparoscopic kidney and ureter removal. Even though the surgery had already started, Dr. Mihir ensured me it was fine that I join. He introduced me to Dr. Yamagochi and her team who welcomed me in and offered to answer any questions I had. This surgery was very different than the mastectomy in that all the work was being done internally and a camera was used to navigate. Because I missed the beginning, I am not sure of the initial steps, but when I entered the doctors were working on cutting the main artery to the Kidney. Dr. Yamagochi explained that you must stop the supply of blood to the kidney before cutting off the outflow so that the kidney does not explode with blood.

This surgery was also different from the mastectomy in that there was no resident, so there were very few teaching moments. While the surgeons were very friendly and open, I was feeling a little tired from the last surgery so I didn’t ask as many questions. Because of this, I was not entirely sure of everything that was going on, but I was very happy just to watch. At one point the air that was being used to distend the patient’s abdomen traveled up to the their face causing them to swell. This concerned the anesthesiologist who suggested turning the air pressure down and elevating the head. The doctors tried this approach and it seemed to alleviate the problem. This surgery was much longer than the mastectomy, about 5-6 hours, and even though I didn’t watch the whole thing by the end of it I was exhausted! I politely thanked the doctors and excused myself as they were closing the patient. It truly amazes me how much patience and stamina surgeons have.

I ended my day around 4pm, and overall it was a wonderful first experience! Everyone was so friendly, and I didn’t embarrass myself once! On a side note Lucy was right when she said that you will know RN Judy when you see her, she needs no introduction. Dr. Godfrey said she was in the Navy Seals and I’m not sure if he was joking, but everyone agreed it would make sense. Wishing everyone who hasn’t had their first day yet good luck!